Once the US is taken out in World War 3, the opportunity to invade a vulnerable EU will be too great to pass up. Since the birth of communism, it has always been the desire of Russia to own and control Europe.

As prophesied to Dumitru Duduman, by the angel Gabriel, as well as indicated in Jonah Ben Noah’s wonder in the sky, once the US is out of the way, China will sweep through Russia and the EU and form a treaty in Paris that will be the Great Reset, which will be a global economic realignment. This invasion of Europe by the Russians and Chinese may also change some borders, once the dust settles. This Great Reset will be the system of the mark of the beast, which may also cover all other parts of the world and be not only the great reset, but a global reset. This is called in scripture The Image of the Beast. The 2 horns of the beast are Russia and China, who will force the mark, the name and the number of his name. They will most likely, move to an all digital, cashless money system.

This is covered in greater detail in my book Evidence Backed End TimeProphecy.

What happens inside the US when this global reset occurs? Well, the west portion of the US will be under Chinese control, but other portions of the US will most likely have pockets of resistance until Jesus comes or possibly whole states and areas under US military control. The North east, Ohio Valley, will probably have great destruction from the war. Florida would be ravaged by the Cubans invading. Texas might be a strong fight and resistance formed. The heartland we hope would be a strong US resistance. The mark of the beast would not be forced in those areas, if God should preserve a portion of the US thru out the tribulation. 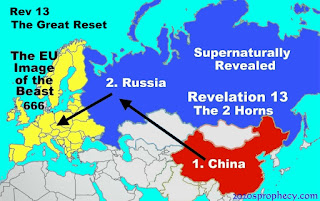 It is but common sense that once the US is taken out, the communists will want to force a global realignment economically, for a more fair currency exchange in place of the very unfair global petro dollar system we have today. The only way to do this would be by force and thus, the invasion and take over of the EU.

When scripture says that he will cause all to receive a mark in their right hand and forehead, it would be all under the jurisdiction of that beast. Whether that jurisdiction covers every iota of the earth or if their be pockets of resistance, remains to be seen, but in a general sense, we would see it globally.

The international bankers have longed to create a global government and they have the technology to digitize everyone with the mark, but it wont take place under the present petro dollar system. That system will be required to be over thrown in a violent way. World War 3 is inevitable for a global mark of the beast system to arise.